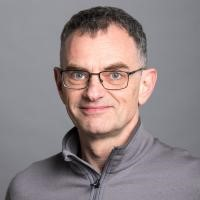 Institute of Physics of the CAS, Prague, Czech Republic, EU

Position: Head of the Department of Spintronics & Nanoelectronics Institute of Physics, Academy of Sciences of the Czech Republic; Professor at School of Physics and Astronomy University of Nottingham (U.K.)

At the NANOCON´21 conference Prof. Tomáš Jungwirth will present a plenary lecture: Antiferromagnets and Altermagnets: From Neuromorphics and Ultra-Fast Optics to Dissipationless Nano-Electronics.

Research Interests and main results:
Tomáš Jungwirth was one of the four members of an international team of physicists who announced the observation of the spin Hall effect, and since then he has contributed many articles in renowned journals to the development of the field of spintronics.

In 2011, he received the ERC grant "Spintronics based on relativistic phenomena in systems with zero magnetic moment", focused primarily on research into the possibilities of using antiferromagnetic substances in spintronic applications.

He is the leader of the team that announced the invention of the possibility of storing electronic data much faster than before thanks to antiferromagnetic crystals in 2016.

200 invited talks at international conferences and colloquia since year 2000.